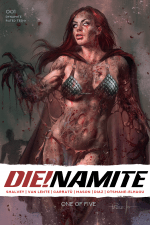 $3.99
In the shadowed alleys of 1930s Chicago, GREEN HORNET and KATO hunt the nefarious criminal element plaguing their city. They soon discover a mysterious danger that threatens Earth itself! Meanwhile, VAMPIRELLA hurtles through space on a Drakulon ship, desperate to uncover a dark mystery... DIE!NAMITE is an event series that unites all of the hit Dynamite characters as you've never seen them before! They will come together to battle the biggest threat they have ever faced. Many...are even missing faces! Written by Declan Shalvey (Deadpool vs Old Man Logan, Bog Bodies) with art by newcomer sensation Justin Mason (Vengeance of Vampirella) and colors by Chris O'Halloran (Immortal Hulk).
→ more 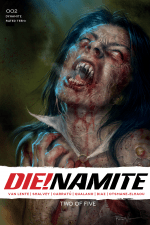 $3.99
Vampirella hurtles through space, unaware of the dangers that lurk within the universe. An evil grows on Mars. And Red Sonja discovers an awful secret...
→ more 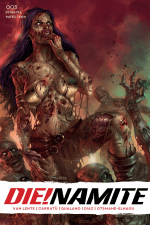 $3.99
Vampirella arrives on Mars but it may be too late for her and Dejah Thoris to save Barsoom...Things go from bad to worse as Earth Project: Zombiepowers spreads the killer virus throughout the globe...and Red Sonja and her mysterious companion may have the key to solving the plague, but first they've got to past an army of zombie gorillas. Did we say zombie gorillas? Yes, we said zombie gorillas.
→ more 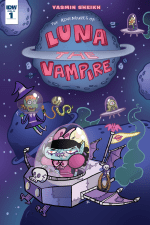 $1.99
HOLY SPACE BLAST! Ever wonder how it would be if outer space was populated by monsters? Or what it would be like to have a green ugly witch as your best friend? Then look no further! Welcome to the AMAZING everyday life of Luna the vampire. (Zombie postman and crappy job included.)
→ more 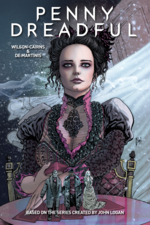 $2.99
The hit TV series is presented in comics for the first time! This prequel reveals the terrifying events that led Vanessa to try and find her missing childhood friend, Mina Harker, and exposes the true nature of the vampiric monsters infesting Victorian London. Beautifully realized by Louie De Martinis, and written by the scriptwriters of the hit show!
→ more 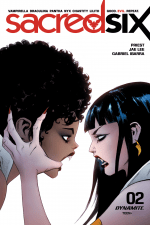 $3.99
Numerology” Two: The enigmatic dark council known as The Six seeks to radicalize the peaceful vampires of Ashthorne while adversaries become unlikely allies as the crisis of missing human children threatens both human and supernatural residents alike. Lilith of Drakulon presses forward with her own mysterious agenda, recruiting the half-vampire Chastity and the all-new Draculina to help her achieve it. Meanwhile, Nyx, daughter of the mad god Chaos, huntsLilith for revenge while Pantha forges an uneasy truce with the City of Sacred’s guardian as time runs out to find the missing boys.
→ more 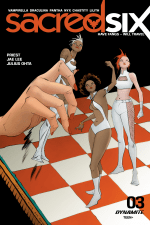 $3.99
"Numerology," Part Three: Tensions come to a boil as search parties fail to locate two missing boys from the City of Sacred, leading the state police to conduct a house-to-house search of the impoverished town of Ashthorne which enrages both human and supernatural residents. The leader of the enigmatic vampire terrorists known as The Six forges a pact with Lilith while the township gathers to make an appeal to Vampirella to stave off a certain bloodbath if The Six succeed in radicalizing the peaceful vampires of Ashthorne.
→ more 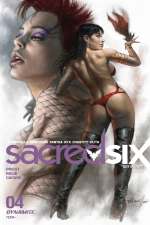 $3.99
"Numerology" Four: seeking revenge, the fire demon Nyx goes on a murderous rampage against Vampirella and Vampi's mother, Lilith of Drakulon, which ultimately draws in the new Draculina and sets a collision course with Lilith's secret agent, the half-vampire Chastity. Meanwhile, the peaceful vampires of Ashthorne are pushed to the brink by an armed invasion by state police while Pantha searches desperately for the two boys whose disappearance threatens to escalate into a bloodbath.
→ more 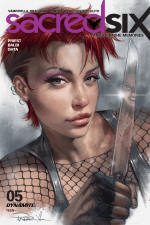 $3.99
While Lilith fends off an en masse attack by the secret vampire society known as Lumea Următoare (no, not THE Foo Fighters), her daughter Vampirella makes the ultimate sacrifice to prevent a slaughter in Vampire Village.
→ more 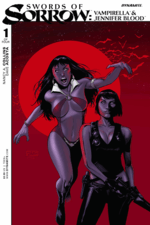 $1.99
A team-up set up by SWORDS OF SORROW's Gail Simone, featuring the writer that she hand-picked: Nancy A. Collins! Vampirella travels to Southern California to hunt down a supernatural serial killer known as the Pacifica Slasher, only to find herself transported to an alternate reality where there's no such things as vampires, demons, and magic. But, as the most dangerous woman in the world, vigilante Jennifer Blood knows, that doesn't mean monsters don't exist. Does the weirdly shaped sword presented to her by the mysterious being called The Courier hold the key to returning Vampirella to her own universe? Or will she be forced to live and die in L.A.?
→ more
1 - 10 of 123 results