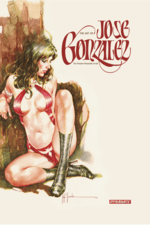 $19.99
For nearly two decades, Jose "Pepe" Gonzalez was hailed as the premier Vampirella artist, drawing the fiery vixen for Warren Publishing in the Seventies and Eighties. Renowned for bringing to life the most beautiful women the art world has ever seen, Gonzalez's career spans from drawing British romance comics to movie stars, book covers to commercial advertising, and, of course, personal commissions for loved ones and devotees. For the first time ever, author David Roach covers Jose's entire career, transcending his vast body of Vampirella work to explore the full breadth of the master's creations. Vampirella collectors and Jose Gonzalez fans rejoice, for the life-spanning retrospective you've been waiting for has finally arrived! Featuring an introduction by fan-favorite painter Joe Jusko.
→ more 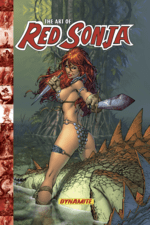 $13.99
From the edge of her sword to the murky swamp below, this magnificent work of art captures every dramatic detail of the She-Devil with a Sword. This is a must have for both the fine art collector and the lover of sword and sorcery fantasy. Over 35 years in the making! Featuring a look at every aspect of the she-devil with a sword - Red Sonja! From the Dynamite revival and back to the classic era of Roy Thomas and Marvel Comics, the Art of Red Sonja has it all! Bursting with incredible art by a veritable who's who of talent: ALEX ROSS, Jim Lee, Frank Cho, Frank Brunner, Adam Hughes, Pablo Marcos, John Cassaday, Art Adams, Mel Rubi, Howard Chaykin and more!
→ more 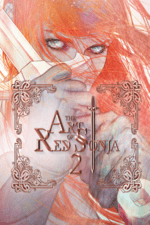 $24.99
Fiery in spirit, skilled in combat, lusty and bawdy in her revelry, the crimson-tressed heroine Red Sonja, known also as "The She-Devil with a Sword", is renowned as fantasy's most prominent female character. Since 2005, Dynamite Entertainment has been the proud home to Red Sonja, publishing hundreds of comics that have garnered critical acclaim and the devotion of a ravenous fan base. This second volume of the Art of Red Sonja showcases the fantastic illustrators and painters that have so perfectly captured the character's essence on cover artwork since 2010, including such comic book luminaries as Jay Anacleto, Ed Benes, Dan Brereton, Amanda Conner, Sergio Davila, Jenny Frison, Lucio Parrillo, Paul Renaud, Alex Ross, Mel Rubi, Marguerite Sauvage, Nicola Scott, and many more!
→ more 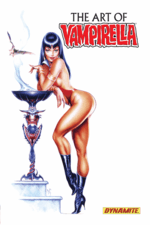 $15.99
For over 40 years, Vampirella has been the muse for many artists in the comic industry and even beyond. Dynamite Entertainment brings forth a veritable museum of fine art masterpieces collected in a 216 page hardcover volume! This tome contains a retrospective of artists who have contributed the most memorable imagery of Vampirella with such names as Jose Gonzalez, Adam Hughes, Dave Stevens, Jim Silke, Jae Lee, Joe Jusko, Amanda Conner, Mark Texeira, Mike Mignola, Mike Mayhew, Joe Quesada, Bruce Timm, Arthur Suydam, Dan Brereton, Michael Golden, J. Scott Campbell and many more. Featuring a spectacular cover by the Dave Stevens!
→ more 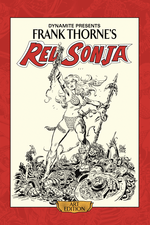 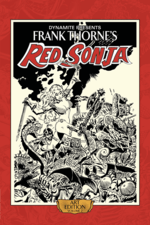 $74.99
Following-up on the best-selling, and soon to be sold out Volume 1, celebrate fantasy illustration's shining star with Frank Thorne's second Red Sonja Art Edition! The consummate She-Devil artist shares his original storyboards from the first six issues of the acclaimed 1977 Red Sonja comic book series. Scanned in high-resolution color and printed at original size, this gorgeous hardcover collection preserves every detail of the artist's meticulous skill and hard work, while simultaneously presenting a complete storyline for all to enjoy.
→ more 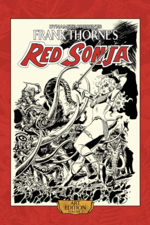 $74.99
The third and final volume in Dynamite Entertainment's Red Sonja Art Edition line dedicated to fantasy illustration's shining star, Frank Thorne! The defining She-Devil artist shares his original storyboards from the issue #7 through #11 of the acclaimed 1970s Red Sonja comic book series. Scanned in high-resolution color and printed at original size, this gorgeous hardcover collection preserves every detail of the artist's meticulous skill and hard work, while simultaneously presenting a complete storyline for all to enjoy.
→ more 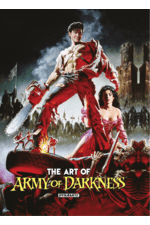 $19.99
Since July 2004, Ash Williams - the reluctant hero of the cult classic film, Army of Darkness - has been an integral part of Dynamite Entertainment's publishing line. Throughout the years, dozens of highly skilled comic artists have drawn and painted our hero, Ash (not to mention the Chosen One's interchangeable armament of chainsaws and mechanical gauntlets, of course). This gorgeous hardcover art book stands as a testament to the unyielding spirit of a horror cinema icon, as captured by some of the comic industry's most beloved talents: J. Scott Campbell, Arthur Suydam, Nick Bradshaw, John Bolton, Ben Templesmith, Tim Seeley, George Perez, and many more!
→ more 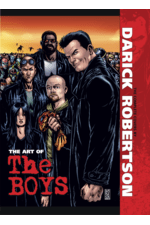 $24.99
The Art of The Boys: The Complete Covers by Darick Robertson In a world where superheroes roam the earth in search of justice for the common man, who brings justice to the superheroes? The Boys do. Butcher, Wee Hughie, Mother's Milk, The Frenchman, and The Female are the badasses that keep the supes in line - protecting mankind from some truly deranged superheroes. Now, for the first time ever, fans can experience the entire collection of fantastically controversial cover art from series artist and co-creator Darick Robertson. This edition also includes all of the exclusive variant covers by legendary guest artists Jim Lee, Dave Gibbons, Howard Chaykin, David Lloyd, and John Cassaday. Topped off with a bonus Afterward by producer Adam McKay (Anchorman, Talladega Nights), the definitive collection of covers fans have been clamoring for has officially arrived - all in one glorious collection! Creator Commentary from Darick Robertson: "What's really fun about this book, in my opinion, is to watch the covers unfold like a story in and of itself. I hope that's what you'll get out of it. Ennis had a great imagination for covers and I always looked forward to what he'd suggest next. In the beginning, I was coming up with numerous sketches and ideas to present, but as we went on, the covers became a real collaboration and he always had a good idea. Some of these sketches (sometimes it would take more than one) are presented here so you can see the evolution of the process. Revisiting the world of The Boys by creating a new cover for this project only seemed appropriate, like spending time with some not-so-friendly old friends."
→ more 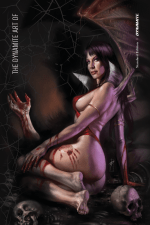 $23.99
For the last decade, artist Lucio Parrillo has crafted some of the most incredible painted images ever seen in comics! For Dynamite Entertainment, Parrillo has painted the most iconic images of the most iconic characters in the company's library! Now, all of this incredible art is presented in one incredible collection! Red Sonja: From Barbarian to Queen! Vampirella: Drakulon and Beyond! John Carter, Dejah Thoris and Tarzan: From the Jungles of Earth to the Wastes of Barsoom! Plus: Zombies, Pirates and Chaos! 200 pages of beautiful women and horrific beasts! Also featuring select process and preliminary pieces of art from Parrillo himself! Lucio Parrillo is an illustrator and painter who for the past 15 years has worked for the most reputable companies in the comics and games industry. He has painted many covers for Marvel Comics, DC Comics, and Dynamite Entertainment. He has worked on trading cards and other game productions, including Magic the Gathering and Warcraft.
→ more
1 - 10 of 10 results