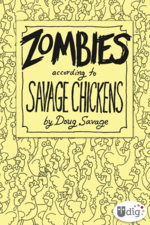 $2.99
If the Internet has taught us anything, it’s that the zombie apocalypse is looming, and it’s coming soon. In order to protect ourselves from the zombies’ grumbling stomachs, it makes sense to prepare by studying a handbook to the nethermost depths of the zombie’s psyche. Zombies According to Savage Chickens is not that guide; however, this e-book original collection of comics certainly makes for a more amusing read, which, after all, is what truly matters. Doug Savage, the cartoonist who has maintained the hilarious Savage Chickens web comic blog since 2005 by uploading sticky notes illustrated with the antics of his clever cast of characters, has imagined another memorable type of Savage Chicken: the Zombie Chickens. Zombies have one thing on their minds: BRAINS. But that doesn't necessarily mean that they run amuck all day looking for the next lucky person in the land-of-the-living to provide lunch. How might a zombie interact at an art auction, wedding, or job interview? What is their ideal Valentine’s Day gift, and how would a zombie Shakespeare have taken his plays to the Globe? These are exactly the questions—the totally relevant questions—about the imminent zombie takeover that only Mr. Savage has the guts (and the brains) to tackle. After all, why study up on the zombie apocalypse when you can laugh at the expense of the undead instead?
→ more 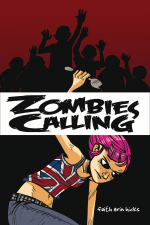 $3.99
Joss's life sucks. She's worried about exams and student loan debt when she'd much rather be watching the zombie movies she loves. So it's no surprise that when she tells her roommates that she's been attacked by a swarm of real-life, brain-hungering zombies-zombies!- they think the stress has finally cracked her. But Joss knows she's sane- and it's a good thing, too! Because the zombies are real, and the she's the only one who knows how to fight them. Armed with "The Rules," truths about fighting the undead gleaned from zombie movies, Joss, Sonnet and Robyn just might make it out of their dorm alive.
→ more 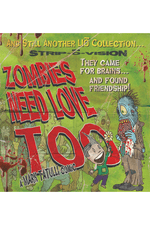 $9.99
"... Mark Tatulli's Lio isn't just a charmingly macabre strip about a creepy little boy who dabbles in the occult; it's also a daily demonstration of how a skilled artist can express sometimes complicated comedic ideas without any dialogue. . . ."— A.V. Club, The Onion Lio is a small boy with a penchant for befriending squids, monsters, and aliens. He's a curious scientist, a comic-book fan, defender of the defenseless, and creator of an army of zombie bunnies. All without saying a word. Zombies Need Love Too is Lio's fifth book with AMP.
→ more 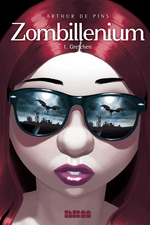 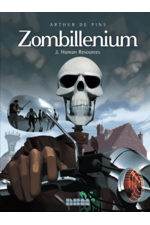 $9.99
Tempers are flaring around Zombillenium, the amusement park run by monsters. When one hires only the witches, vampires, werewolves, and other undead in a region where unemployment is in the double digits, one must expect some friction. But things get particularly ugly when the park’s security is breached from two sides: activists and a very strange visitor, the mother of two peculiar sons that the head of the park seems to remember from somewhere. Presented in Arthur de Pins’s trademark, tongue-in-cheek black humor, this is a stunning beautiful, fully painted graphic novel that plays on that traditional horror genre.
→ more 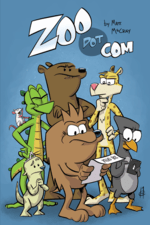 $3.99
In order to cut costs, the Zoo decided it would be a good idea to have the animals run their IT department and website.
→ more