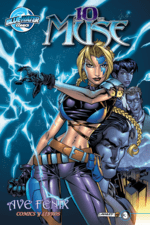 $3.99
10th Muse comenzó su carrera en Image Comics, llegando a ser uno de los mejores libros de la editorial. En este tercer volumen, la verdad se revela. La musa ha sido derrotado y su alma se ha retirado del cuerpo de Emma Sonnet. Ahora no hay nadie para detener Grayson partir al frente de sus fuerzas en contra de los "Dioses del Olimpo." Escrito por Marv Wolfman, con el arte de los X-Men, el artista Roger Cruz, se trata de una colección que no querrá perderse. The Muse has been critically wounded and lies dying. Her only hope to survive is learning the truth about who she is. And the only man who can tell her what she needs to know is the one who sent the assassin after her in the first place. Trouble is, even if Emma Sonnet does learn the staggering, unbelievable truth, can she use it to save herself in time? An intense action psycho-drama that will change everything you believe about the woman known as The “10th Muse."
→ more 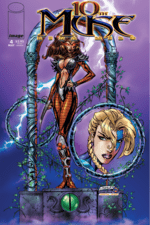 $1.99
In order to learn about her past, Emma Sonnet and her friends return to Greece, the place where her life was suddenly turned upside down. The trouble is, there are those who need for her past to remain hidden, even at the cost of her life. Also introducing the menace called MEDUSA.
→ more 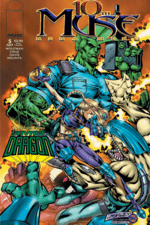 $1.99
GUEST STARRING TELLOS' SERRA! Even as her friends have been turned to stone, The 10th Muse has found herself transported to another dimension. This is the high-fantasy realm of the acclaimed Image Comic Series - TELLOS, and it is filled with dangers unlike any the Muse has ever faced. But, more important to the Muse is that Tellos holds a vital secret to the Muse's hidden past.
→ more 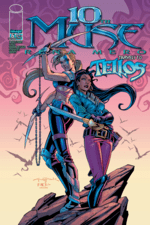 $1.99
The Muse is taking her first trip...to the Savage World. There she will team up with the Savage Dragon to track down the Mighty Minotaur. There is no telling what can happen when these two heads collide. This is the start of a new story arc.
→ more 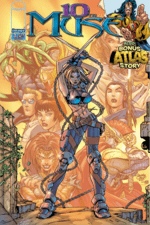 $1.99
At long last the Muse meets Maxwell Gideon and learns the terrible secrets that caused her to be banished to Earth almost five thousand years before. Also! The truth behind Gideon's millennia-long hunt for her. When all the facts are revealed, the Muse has to make one final, tragic decision: she must sacrifice her own life to save the lives of her friends. Don't miss this amazing turning point in the life of Emma Sonnet and the Muse.
→ more 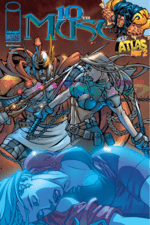 $1.99
The 10th Muse has been defeated and her soul has been removed from the body of Emma Sonnet. Now there is no one to stop Grayson from leading his forces against the "Gods of Olympus." The all-too-human Emma and her friends Brett and Dawn understand only they stand between Grayson and total conquest of the Gods. But the only way they can survive against Grayson's power is to enlist the service of their greatest enemy, one who nearly destroyed them when last they met.
→ more 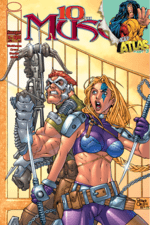 $1.99
Everything has been leading to this powerful issue. All the Muse's secrets are at last revealed as Bishop's war on Olympus turns San Francisco into a battleground of the Gods. Olympians and Titans wage a final war and it seems that only Emma Sonnet- the 10th Muse- stands as Earth's Protector. Featuring the introduction of Orion the Hunter. Extra! The conclusion of our first "Atlas" comedy adventure. Atlas may have been the guy who holds up the Earth in Greek mythology, but here on Earth our hapless hero is forced to share an apartment with the newest, meanest, and baddest would-be super-villain of all time. Anyone with half a brain would run back home. Fortunately for us, half a brain is twice the brains that Atlas has. Super-hero action at its silliest.
→ more 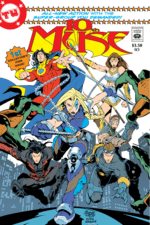 $1.99
10th Muse is the story of Emma Sonnett, a lone hero sets forth to seek out justice. A district attorney by day and the Muse by night, 10th Muse features Greek Mythology set in modern day world. This special first issue heats up the action right away! He calls himself The Guardsman and he has come to Earth to enlist the services of five very special protectors to defeat an unstoppable force known only as Overthrow. To protect the Earth these five heroes come together to form The Odyssey, this planet's newest and greatest superhero team featuring The 10th Muse, Orion the Hunter, Trident, Isis and Atlas. But there is more to both The Guardsman and Overthrow than even the Odyssey know, and what is at stake is a greater menace than any this planet has ever faced before! If you've never bought The 10th Muse before, don't fail to read this issue. Because after this, nothing will ever be the same again.
→ more 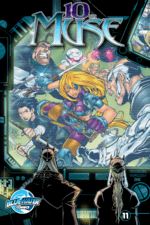 $1.99
Emma finally has a moment to breath, or at least she thinks she does as all is back to normal in her District Attorney's office. Just when she thought that she could have a good night's sleep, a new group of super villains start making their presence known in San Francisco. Forced into action once again, "The Endgame" plays the Muse to her already stretched limits. Getting badly beaten, her dual lives are in more conflict than ever as her parents are stopping by for the weekend!
→ more 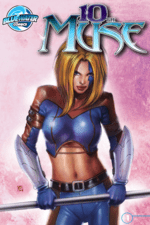 $1.99
The Muse is back and things have not gotten any easier on Mount Olympus. In fact, the future of the entire Greek Pantheon teeters on the brink of extinction. The gods look to Emma Sonnett, the Tenth Muse, to restore their glory and preserve the old ways. But before they can fix this divine rift, the Muse and Ares, the god of war, must find out the cause of this Olympian cancer. And when Olympus finally falls the world itself is poised to suffer.
→ more
31 - 40 of 5272 results