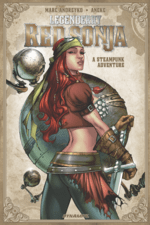 $10.99
From the pages of Bill Willingham's Legenderry: A Steampunk Adventure... it's Red Sonja, the crimson-tressed rogue and ruffian, facing off against science run amok in a tale by writer Marc Andreyko and artist Aneke. Against a Neo-Victorian backdrop of clockworks and Tesla coils, fantasy's most fearless heroine sets sail through a whole new world of adventure and intrigue! After a year on the run under the assumed identity of Magna Spadarossa, Red Sonja returns to fiery form as an ale-swilling, rapier-swinging ship captain... but it's only a matter of time until she's called to action, drawn into a madman's plot to conquer the world! Befriending Elizabeth, the undead bride of Victor Frankenstein, Sonja discovers that the evil scientist has been kidnapping inventors and professors to steal their secrets and raise an unstoppable monster army. Will the She-Devil with a Sword unravel the plot in time, or will she fall victim to the mad doctor and his ally, the dreaded Captain Nemo?
→ more 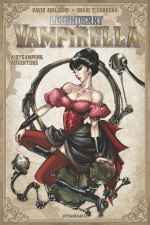 $9.99
From the pages of Bill Willingham's Legenderry: A Steampunk Adventure... it's Vampirella, the immortal horror heroine, neck-deep in conspiracies and corruption. Against a Neo-Victorian backdrop of zeppelins and petticoats, the raven-haired adventurer stalks an alternate reality of danger and darkness in a tale by David Avallone and David T. Cabrera! When not entertaining her guests at the classy Scarlet Club as Madam Pendragon, Vampirella stalks out into the cobblestone streets of the Big City in pursuit of The Council, an alliance of the deadliest ne'er-do-wells ever to plague civilized society. But the hunter becomes the hunted when Blackmass, the extradimensional demon with a hunger for human souls, ventures into the night, pursuing tasty morsels without Council supervision. As panic sets in among friends and foe alike, Vampirella must face a host of enemies -- including the beast-like Black Bat, the devious Veiled Lady, and many more -- in a desperate race to reach the monster first!
→ more 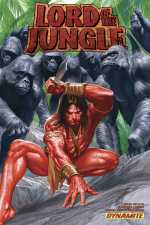 $14.99
The original Lord of the Jungle returns! If you thought you knew the story, think again! Forthe first time in its 100-year history the classic Edgar Rice Burroughs story, Tarzan of The Apes, is told - UNCENSORED! This series captures the savagery and action of the original while expanding on it with new elements! The story begins in the late 1800s, as John Clayton, Lord of Greystoke, and his wife, the Lady Alice, are left stranded on a remote African coast. They must fend for themselves in this savage world, and the fact that Lady Alice is pregnant doesn't make things any easier! Collecting the first eight issues, along with a complete cover gallery, the violent saga of Greystoke begins here, written by Arvid Nelson and illustrated by Roberto Castro, and featuring covers by Alex Ross, Lucio Parillo, Ryan Sook, and Paul Renaud.
→ more 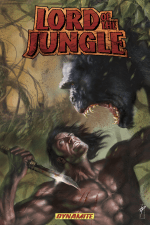 $12.99
Collects Lord of the Jungle 9-15! Paris, 1909. Dark clouds are gathering over Europe, and an ancient manuscript stolen from an American university might hold the key to victory in the coming war. Now, Tarzan finds himself thrust into the deadly intrigue when he foils an attempt on a beautiful young countess's honor while crossing the Atlantic Ocean. If you think you know Tarzan, think again! This is the original character - savage and fearless, but also a lost soul trying to find his place in a world that does not understand him. Lord of the Jungle Volume 2: The Return of the Lord of the Jungle. It's two-fisted pulp fiction, with a brain as big as its heart! Collecting issues #9-15 of the hit series, plus all covers, in one volume.
→ more 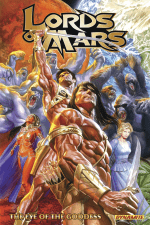 $12.99
Two legends of science fiction and fantasy literature collide in an epic crossover event! Tarzan, the legendary Lord of the Jungle, has claimed his title as a British nobleman, but his very life is threatened when a hunting excursion among high society goes disastrously wrong. Meanwhile, John Carter, the Warlord of Mars, responds to a veiled threat from his defeated enemies. Though separated by millions of miles, these champions of Mars and Earth are drawn together by a sinister cult and manipulated into a deadly confrontation. With their lives and those of their beloved Jane and Dejah Thoris on the line, can these iconic heroes put aside their differences and survive the Thern plot... and a thousand rampaging White Apes? Includes a cover gallery of over a dozen cover editions from the Lords of Mars comic book series.
→ more 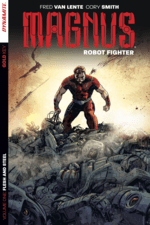 $11.99
In the blink of an eye, young martial artist Magnus has everything taken from him: his father, his wife, his entire life. He's suddenly thrust into a futuristic world he doesn't understand, populated by humans and robots living together in oppression! Can Magnus fight to get his life back... and once he learns the truth about himself, will he want to? Includes the first four-issue story arc from Fred Van Lente and Cory Smith's popular comic series, plus the special Magnus: Robot Fighter #0 issue featuring story by Van Lente and artwork by Roberto Castro.
→ more 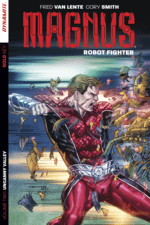 $8.99
Retreating from the mad, mad world of mechanical overlords, Magnus descends into the SubStructure, where a bizarre collection of feral humans called Gophs live free from robot society. Winding up in the Uncanny Valley, a forbidden sex and death club, the timelost rebel discovers a gladiatorial pit where humans fight to the death, and the slain are dismembered for spare parts. Can Magnus hold his own against the merciless Goph hordes? Collects issues #5-8 of the ongoing Magnus: Robot Fighter series.
→ more 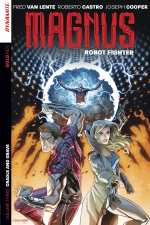 $8.99
This volume collects issues #9-12 with a script to issue 9 and a complete cover gallery of Magnus: Robot Fighter. Magnus, the martial arts expert and ultimate robot fighter, has reunited with his father, the artificial intelligence known as 1A. Satisfied to have a new purpose in life, Magnus is sent on a mission to free a monstrous creature known as the Basilisk. But once released, it can't be stopped or contained... and it believes itself to be God! Can Magnus and his former pursuer Leeja hit reboot on this devastating new threat, and is this the end or just a frightful new beginning?
→ more 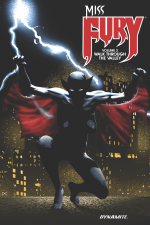 $10.99
Marla Drake, the untamable costumed adventurer known as Miss Fury, fought Nazis with wild abandon not just during World War II, but - due to a scientific mishap - throughout time, as well. Now trapped in the 1943 of a parallel universe, she comes face-to-face with her mirror double, a hedonistic murderess whose soul was never saved by the love of a good man. Realizing what her life could be like now that she has lost her own beloved Matthew Chandler, she surrenders to the slimy promises of Schauburger, a rogue (and dead) Nazi agent whose ghost can alter the timestream and set things right. The cost? Killing the alternate Marla Drake, the Pharaoh of Time, the Mafia superhero The Mob, a US Naval Intelligence nuclear physicist... and the list goes on. No matter how hard she tries, people just seem to want Miss Fury to murder for them. How many must die so that she can become a good person again?
→ more 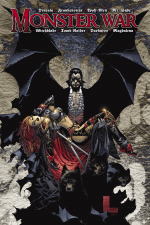 $11.99
BY CHRISTOPHER GOLDEN AND TOM SNIEGOWSKI; ART BY JOYCE CHIN AND VITOR ISHIMURA; COLORS BY SCOTT KESTER; COVER BY MARC SILVESTRI AND JOSEPH MICHAEL LINSNER (50/50 SPLIT) The first appearance of the Classic Monsters is now available in one trade paperback collection! Debuting in a special cross-over with the Top Cow Universe, the Classic Monsters have their sights set on Ash in the current AOD storyline, but see where it all began in this new TPB! Reprinting the entire Top Cow/Classic Monsters: Monster War 4-issue mini-series by writers Christopher Golden and Tom Sniegowski along with artists Joyce Chin and Vitor Ishimura along with a cover gallery featuring the artwork of Marc Silvestri, e-Bass, Joyce Chin, and Joseph Michael Linsner!
→ more
31 - 40 of 97 results