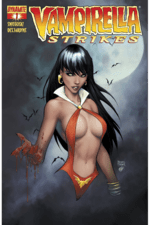 $1.99
Fearful that her monstrous nature is taking control, Vampirella takes solace in some extreme violence, and conversation, all topped off with a nice glass of Merlot, in a Boston tavern overrun by the demonic in the first part of this six issue story. Living in a world of growing supernatural threats, Vampirella never knows what she will be facing from one moment to the next, but what she finds waiting for her in her Boston Brownstone when she returns from a night of hunting is the most unexpected of all. Angels of Heaven sent by God . . . and they want Vampirella to work for them.
→ more 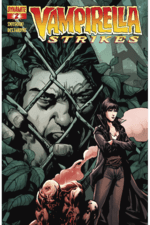 $1.99
To understand the ways of the fallen angels, Vampirella must seek out the assistance of Janus, a former soldier in the legion of Heaven, who walks the line between the damned and divine. But someone would rather the pair never meet, as a horde of street people-under the influence of a deadly new, body-twisting drug made from the blood of an Archangel-are sent to deal with them. Vampirella's mission for Heaven could be over before it's even begun.
→ more 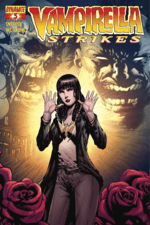 $1.99
The angel general, Evanuel has made a deal with devils-but why? What secret would be so dire as to make one of the most powerful angel soldiers in Heaven's legions give up his blood willingly?
→ more 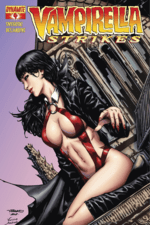 $1.99
The demon Balthazar knows that Vampirella and her ally, the fallen angel Janus, have been charged by Heaven to recover its missing general... and has derailed their search by casting them into the gladiatorial pits of the 10th Level! Can our raven-haired heroine survive the arena's hellhounds and upset Hell's schemes?
→ more 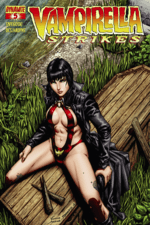 $1.99
Receiving aid from the most unexpected of places, Vampirella and Janus are back on the trail of the missing angel general as the mystery of what sent the divine military leader into hiding is revealed. Who are the mysterious children that Evanuel has sworn to protect, and what do they have to do with the eventual extinction of the angelic species? And, what terrible fate has befallen the customers of the Club Switzerland? All will be revealed in the thrilling, penultimate issue of the On the Side of Angels story line.
→ more 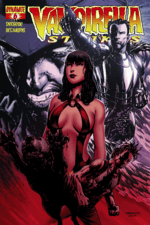 $1.99
Vampirella, Janus and the demon hound, Cleo, at last find their way to the island in the South China Sea where all their questions will be at last answered. Will the angel general, Evanuel, finally be freed from the clutches of the demon, Balthazar . . . and does he even need to be? Will Janus at last find absolution, and be allowed to return to Heaven? And what horrific act will bring Vampirella that much closer to God?
→ more 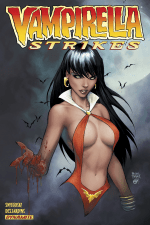 $10.99
Collects Vampirella Strikes #1-6! For years, the raven-haired heroine Vampirella has hunted the world's supernatural threats, all the while fighting back her own bloodthirsty nature. After a night out in Boston leads to particularly brutal violence, she seeks comfort in her Brownstone home... but discovers the most unexpected surprise of all. Angels have been sent to her by God - and they come asking for help! Enter Janus, a former soldier in the legion of Heaven, who skirts the line between the damned and divine. Only a fallen angel can navigate Vampirella through the seedy, demon-run underworld, where she hopes to find the source of an addictive, body-altering drug derived from archangel blood. Will Vampirella's mission redeem her... or will she uncover secrets so shocking that their discovery will damn her forever?
→ more 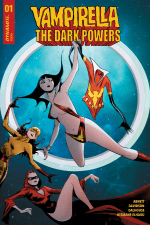 $3.99
THE COSMIC SAGA BEGINS HERE! Welcome to THE PROJECT, an interdimensional collective of superheroes, tasked with recruiting members from across infinite worlds. And their newest recruit is...VAMPIRELLA!? Superstar writer DAN ABNETT and artist PAUL DAVIDSON bring you the first chapter in an epic tale that will affect thousands of planets, billions of lives, and will answer the question: "What happens when you ask a vampire to save the universe?"
→ more 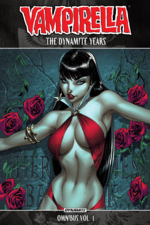 $31.99
In 2010, Dynamite Entertainment reintroduced readers to Vampirella, the most iconic heroine in the history of horror comics! Now, for the first time ever, the raven-haired monster hunter's one-woman war on evil is collected in a massive Omnibus edition, an epic compendium of mystery, mayhem, and the macabre! In hot pursuit of the infamous Vlad Dracula, Vampirella discovers a far-reaching conspiracy far deadlier than the Lord of the Undead himself. Thrill to the action and intrigue with three complete storylines: "Crown of Worms", "A Murder of Crows", and "Throne of Skulls", comprising issues #1-20 of the ongoing Dynamite comic book series, plus bonus stories originally presented in the first two Vampirella Annuals.
→ more 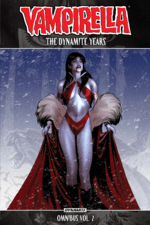 $31.99
Vampirella, a lethal beauty waging a war against the undead and demonic, must defend her recent actions to a tribunal deep within Vatican City. Hell is coming to Earth, and only Vampirella and her trusted allies can stop it! Bad blood and old grievances are put aside when a deadly coven of witches threatens to unrival all time and reality, and Vampirella finds herself stranded one hundred years in the future. A vision of things to come forces our heroine to make a painful decision, forever altering her fate. Then, what begins in the shadowy jungles of a voodoo island empire will reach its astonishing conclusion in Hell itself! Everyone's favorite dark heroine will be pushed to the breaking point as her sanctuary is threatened, her love is at risk, and her own mother might just be her worst enemy after all! It's a story of endings and beginnings!
→ more
3791 - 3800 of 4015 results