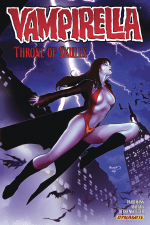 $16.99
Collects Vampirella 12-20! A mysterious hijacking--by an undetectable force which leaves only death in its wake-- lures Vampirella to Russia, and deeper into a deadly conspiracy where nothing is what it seems. At the request of Vampirella's allies-- the Vatican's paranormal covert strike force, Cestus Dei-- the blood-drinking scourge of the supernatural travels to Russia, on the hunt for a terrifying killer with a gift for murder. But there's more at play than a simple search-and destroy mission. Complicating matters is the return of the King of the Vampires, Dracula-- more powerful than ever before, and determined to consecrate an unholy pact with ancient, unknowable forces that even the lords of Chaos and Order wisely fear. War is on the horizon, and only one who has worn the Crown of Worms can sit upon a Throne of Skulls. Old foes are reborn, alliances are broken, and nothing in Vampirella's world will ever be the same!
→ more 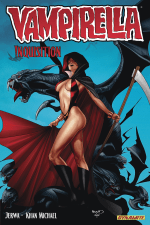 $10.99
Collects Vampirella #21-26! Vampirella must defend her recent actions to a tribunal deep within Vatican City. Accused of falling to the corrupting influence of Chaos, she struggles to prove her innocence while simultaneously fighting a psychic battle with her most powerful enemy. Meanwhile, the vampire lord Dracula prepares his dark army for a march against humanity, empowering a terrifying new lieutenant to lead the charge.
→ more 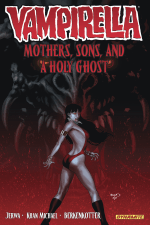 $10.99
Secrets (and blood) are spilled when supernatural heroine Vampirella is drawn into an unexpected family reunion! What are the secrets of The Conjuress and the man called Criswell... and how do they relate to Lilith, Vampirella's estranged mother? But bad blood and old grievances are put aside when a deadly coven of witches threatens to unravel all time and reality, and Vampirella finds herself stranded one hundred years in the future. A vision of things to come forces our heroine to make a painful decision, forever altering her fate. Will she survive as a new kingdom rises in the land?
→ more 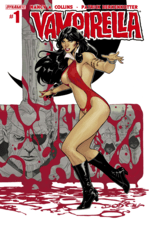 $1.99
In FEAST OF SHADOWS, the first in the six-part OUR LADY OF SHADOWS story arc. Vampirella is sent by the Vatican to investigate the kidnapping of a little girl by Ethan Shroud and the Chaos cultists, only to become the centerpiece of a ritual invoking Lady Umbra, the sister-bride of Chaos, that leaves her marked as a living sacrifice to the dark goddess who rules the shadows. VAMPIRELLA is back and returns to her horror roots with Bram Stoker Award-winning author Nancy A. Collins (Swamp Thing, Sunglasses After Dark, Jason vs. Leatherface) and Patrick Berkenkotter (The Torch, Dark Shadows).
→ more 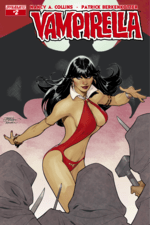 $3.99
Continuing Dynamite's celebration of Vampirella's 45th anniversary! Upon learning of Vampirella being marked as a vessel for Lady Umbra, Demon-Queen of the Shadows, her contacts in Cestus Dei label her a threat and send an elite hit-squad of monster-killers-the Mallus Maleficarum, aka the Witch-Hammer-lead by the implacable Father Nicodemus, to dispose of her. With her world abruptly turned upside down, Vampirella finds herself unexpectedly allied with the strangest bedfellow imaginable.
→ more 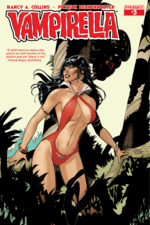 $3.99
Best-Selling author Nancy Collins continues her epic run on Vampirella! After escaping the Witches Hammer-the Vatican's elite monster-killing squad, lead by Father Nicodemus-Vampirella's new-found ally, the Nosferatu known as Drago, reveals that the only way to lift the curse placed on her by Ethan Shroud that is slowly making her a living vessel for Umbra, Our Lady of Shadows and Bride of the Apocalypse, is for her to drink the blood of certain rare species of vampire. The first stop on their monster world tour is Thailand, where Vampirella must hunt down and kill a horrific creature known as the Krasue-which appears only at night as the head of a beautiful woman-attached to nothing but a heart, a pair of lungs and a mass of entrails!
→ more 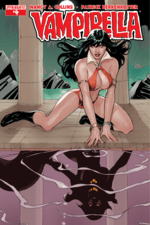 $3.99
In a desperate attempt to fight Lady Umbra's growing control over her mind and body, Vampirella and her unlikely new ally, Lord Drago, take a jaunt to the Mediterranean. There, on the Greek island of Lamos, famous for its unspoiled beaches and friendly natives, they search for the most ancient species of vampire in the world: the dreaded lamia of legend. But can Vampirella locate and slay the seductive half-serpent before her heart falls into shadow?
→ more 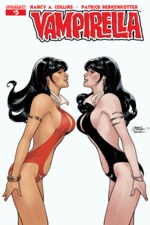 $3.99
In "Kauzstadt", the penultimate episode of the "Our Lady of Shadow" story arc, Vampirella and Drago travel to Eastern Europe in search of the vampire blood necessary to defeat Lady Umbra, the Queen of Shadows. Their first stop is in Serbia, where they must locate and hunt down the rarest of vampires, the eerily beautiful Leptirica, before heading to the Transylvanian village of Kauzstadt, home of the King of the Nosferatu - who also happens to be Vampirella's half-brother! From the creative team of writer Nancy A. Collins (Swamp Thing, Sunglasses After Dark) and Patrick Berkenkotter (Avengers/Invaders, The Torch).
→ more 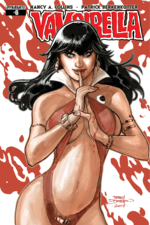 $3.99
In "Total Eclipse of the Heart", the final chapter in the "Our Lady of Shadows" story arc, Vampirella must battle the King of the Nosferatu- the oldest vampire in existence-if she wants to keep the demonic Lady Umbra from laying claim to her body and soul, thereby triggering the start of the Apocalypse. As she frantically races against the clock, the sudden reappearance of Father Nicodemus and the Vatican's elite hit squad, the Witches Hammer, threatens to ruin everything. Can Vampirella break free of Lady Umbra's control in time to save an innocent little girl from being sacrificed by Ethan Shroud, or will her heart finally fall into eternal shadow?
→ more 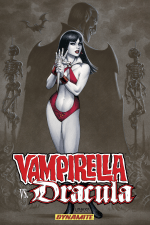 $9.99
Collecting the six-issue series in one volume, along with a complete cover gallery featuring art by Joe Linsner. Spinning out of Alan Moore's retelling of the ageless horror classic, Dracula has come to America to play out his timeless narrative in this brave, New World. Only he didn't realize ANOTHER vampire already beat him to it. Drawn to one another across continents and centuries by a mysterious force, both Vampirella and Bram Stoker's immortal monster find themselves sucked into a time-tossed epic of love, hate, death, and damnation. But can an epic built for one vampire possibly hold them both?
→ more
3741 - 3750 of 4015 results