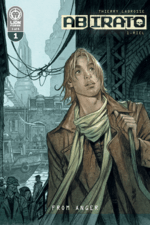 $3.99
In a dystopian future of mounting sea levels, the rich have access to a rejuvenating vaccine that can allow lifespans of hundreds of years. A young man named Riel arrives in the urban metropolis of Montreal and meets a young woman, Neve, who is allied with rebel insurgents (the "Bastards of God") fighting the corporate powers that control the city and the vaccine.
→ more 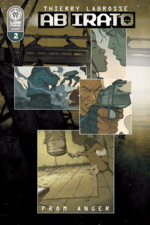 $3.99
Riel follows Neve into the rebel ranks just as the security forces of the city begin their murderous search for the mysterious Gana.
→ more 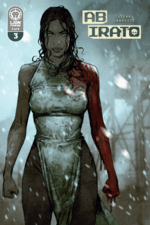 $3.99
Gana raids the headquarters of Juvex Corp even as the Bastards of God, under mounting pressure from the police, fall into infighting and take hostages--amongst them Neve.
→ more 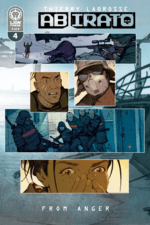 $3.99
Riel learns to his horror that the police have decided to solve the hostage standoff with extreme prejudice: no traces, no witnesses, no rebels, no hostages . . . and Gana finds that mercenaries hired by Juvex Corp are closing in on her.
→ more 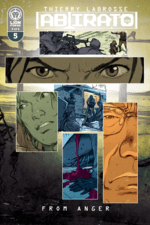 $3.99
The radical new leader of the Bastards of God threatens to execute a hostage every hour if his demands are not met, Neve tries to escape from her captors, and Riel searches desperately for a solution.
→ more 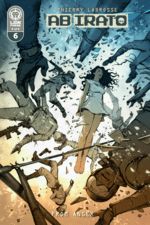 $3.99
In the finale to Ab Irato, Riel tries to save Neve even as Gana's final confrontation with the CEO of Juvex comes to its bloody conclusion, and a city pushed to the brink by rage and anger threatens to implode.
→ more 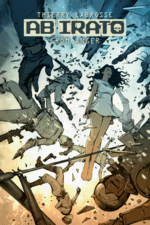 $24.99
In the dystopian future of 2111 and a world of mounting sea levels, the wealthiest fraction of the population has access to a rejuvenating vaccine that can allow lifespans of hundreds of years. A young man named Riel flees the bleak life of the drowning countryside for the urban metropolis of Montreal; there he meets a young woman named Neve, and falls in love, but he also discovers that the city is full of dangers, including rebel insurgents (the "Bastards of God") who are fighting the corporate powers that control everything, demanding equal access for all to the miracle elixirs that can prolong life. Amongst the rebels is a young woman with unusual and mysterious powers, Gana, who is aiming to assassinate the CEO of Juvex, the company that produces the vaccine. As the story spirals into violence and the city into civil war, Neve is taken hostage by the rebels, Gana gets closer to her target, and their investigations begin to reveal that the vaccine may not be everything it's cracked up to be . . .
→ more 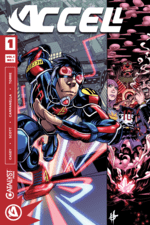 $3.99
Daniel DosSantos is a young man living at the speed of life. After gaining powers from exposure to an extraterrestrial object, DosSantos became the rapid action superhero called Accell, the first of a new public kind of self-appointed crime fighter. Unfortunately, there are consequences to moving faster than sound. Accell is about to learn that danger exists on the flipside of having superpowers, and will have to grow up quickly to survive.
→ more 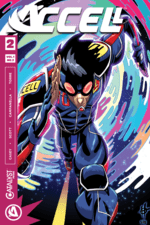 $3.99
Daniel DosSantos is Accell, the first speedster superhero in a brave new world, but just how fast is he? Accell's quest to test the limits of his powers throw him into a sideways dimension where horrors exist, and death comes at him faster than the speed of sound.
→ more 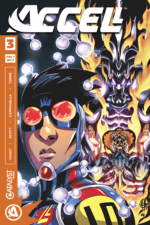 $3.99
Accell can run faster than fast, but he's not faster than the speed demon hot on his tail. With the help of a mysterious elder, the world's first superhero fights for his life. This is the night that will change Accell's life forever, and everyone doesn't make it out alive.
→ more
1 - 10 of 168 results