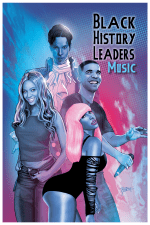 $11.99
Drake, Nicki Minaj, Prince, and Beyoncé changed what music means. He made a name for himself as an actor, portraying wheelchair-bound Jimmy Brooks Degrassi: The Next Generation, but when Aubrey Graham went by his middle name, Drake, he rocketed to stardom with a sound unlike any before him. From her humble beginnings in Jamaica to her childhood in Queens, New York, to her spotlight alongside high-profile personalities on the American Idol judge's panel, hip hop star Nicki Minaj came to conquer the music scene. She succeeded. So much has been left unsaid about the passing of legendary music innovator Prince Rogers Nelson. Prince, a prolific musician from Minneapolis, started a musical revolution with the hits "1999," "Little Red Corvette," "When Doves Cry," "Purple Rain," "Batdance," and more, challenging even the "King of Pop," Michael Jackson, for chart supremacy during the 1980s. She might not be a superhero, but judging by all the things she's done, you'd be hard-pressed not to think she is. She's amazing, fierce, and always striving to be the best. All the single ladies know that Beyoncé is one of the world's hottest musicians, if not the hottest. Explore the lives of those who made us stand up and take notice during Black History Month.
→ more 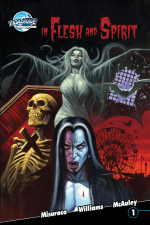 $3.99
A gothic odyssey intensely influenced by classic horror cinema and 1970s comics and backed by an exhilarating Goth/electronica/metal soundtrack, In Flesh and Spirit gives comic, cinema and music fans alike something to really sink their teeth into. Written by Baron Misuraca, frontman of the renowned Gothic Metal band Vasaria, In Flesh and Spirit chronicles the origin and ongoing saga of Baron Misuraca, vampire. Originally a condemned 14th century musician now reborn in contemporary New York City, Baron is slave to two masters-an insatiable lust for blood and a spiritual quest for redemption. Additionally, In Flesh and Spirit unleashes an array of all-new awe-inspiring femme fatale characters lead by the ultimate antagonist Apathess. In Flesh and Spirit features artwork by the artist dream (or perhaps nightmare?) team assembled specifically for this undertaking. DC/Heavy Metal/Vampirella artist extraordinaire Alex Horley captures the very essence of undeath with his ominous cover.
→ more

$15.99
NVRLND is a dark and magical re-imagining of PETER PAN set in the present-day landscape of Hollywood. Wallflower turned wild-child Wendy Darling befriends the fiery Tiger Lily and falls into the music rave scene of the underground club NVRLND. Intoxicated by the music Wendy falls for the enigmatic Peter, lead singer of the band The Lost Boys. Peter is everything a girl could desire: Handsome, daring and reckless. Wendy discovers that Peter is mixed up with the mysterious tattoo artist James Hook, who preys upon the young who flock to Peter, “hooking” them on the new designer drug, Pixie Dust. You think you may know the truth about NVRLND but the truth is you know nothing. NVRLND is a story for anyone who never wants to grow up...but may not live long enough to have a choice
→ more 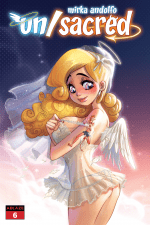 $3.99
Angelina is pregnant! And Damiano is, frankly, a bit terrified... What will happen to his dreams of rockstardom? How will he adjust to fatherhood? And most importantly of all...will he still get laid?!
→ more 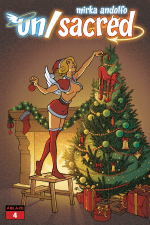 $3.99
In Un/Sacred Vol 2, Mirka and her special guests invite you once again into the world of Angelina and Damiano…and Eden, the new arrival in the family! Issue 4 features the story of Damiano’s band getting back together, a day in the life of Angelina’s school teaching adventures, and more…
→ more
1 - 5 of 5 results