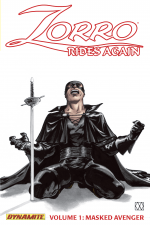 $9.99
Alta-California is a land under the iron rule of a military dictatorship, yet freedom and justice have a champion with a flashing blade-the masked rogue known only as El Zorro! Yet even this fearless nocturnal avenger is only human-- and tragedy can't always be averted. When the Alcalde's soldiers murder a young farm family, events are set in motion that will change Zorro's world forever. As Alcalde Quintero and his devious master-at-arms, Esteban Pasquale again attempt to lay their hands on the secret gold mines that lay beneath the lands of the Pulido estate, Don Diego de la Vega again finds himself reunited with his estranger sweetheart in an effort to save her father from persecution. All the while, Diego is unawares that his own father has stumbled upon a closely guarded secret-the fact that his seemingly indolent son is, in fact...ZORRO himself! Collecting issues #1-6 of the 12-issue series, including a complete cover gallery!
→ more 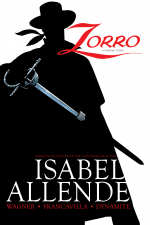 $14.99
Written by Eisner Award-Winning writer/artist Matt Wagner! With art by Francesco Francavilla and covers by Matt Wagner and Mike Mayhew! The Year One Origin of Zorro by Matt Wagner and Francesco Francavilla is NOW collected in a MASSIVE volume! Inspired by all of the best Zorro has been (as well as the best-selling novel by Isabel Allende), Matt Wagner has crafted an exciting tale of adventure, revenge and intrigue, all incredibly illustrated by Francavilla! This collection reprints issues 1-8 of the series along with a complete cover gallery featuring Matt Wagner, John Cassaday, Mike Mayhew and Ryan Sook! 208 pages.
→ more 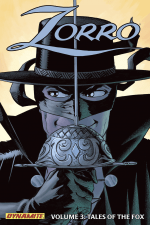 $14.99
Artist Francesco Francavilla returns to the pages of Zorro! Under the skillful hand of Eisner-nominated writer and cover artist Matt Wagner, Dynamite's Zorro series continues with issue #15 and the beginning of their third story arc. This time, El Zorro faces a band of merciless pirates and the line continues to blur between the masked avenger and his alter-ego, Diego!
→ more 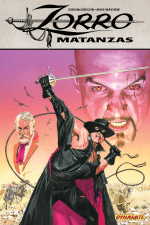 $14.99
The long lost adventure of Zorro continues! Join the classic creative team of writer Don McGregor and artist Mike Mayhew as they present an untold tale of the legendary Fox in the wilds of old California.
→ more
1 - 4 of 4 results