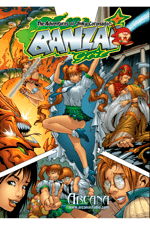 $5.99
This manga digest format BANZAI GIRL reveals the adventures of Jinky Coronado in black-and-white-with-graytones manga style. Popular manga artist/writer (and FMH Model!) Jinky Coronado brings her fancified life adventures to life in this 160-page saga. Watch Jinky reach her 18th birthday! See the amazing attack by tentacle monsters! See her parents and townspeople controlled by alien invaders! Discover the terrible Snakeman beneath the mall, devouring young schoolgirls! Learn of the maddening Manananggal, a vampire so vile it preys on expectant mothers to suck the very lifeblood from their unborn babies! The life and relationships and friendships are real. The monsters and creatures are authentic urban legends. The Asian artwork is fabulously Filipino. And the adventures spring from the mind, keyboard, and drawing table of the real-life Jinky Coronado, everyone's favorite Asian schoolgirl!
→ more 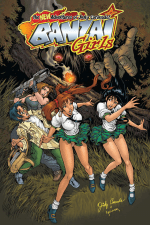 $5.99
Fan-favorite FHM model/artist/writer Jinky Coronada is back in the third volume of Banzai Girls'. "The Terror of... Tikbalang!" has everybody's favorite popstar schoolgirl facing off against the Filipino legend part-horse-part man creature who seeks a wife!As well Jinky and her artist friends Larry Tuazon and Tina Francisco create a massive pin-up gallery of Banzai's fantastic fantasy females. This blockbuster also includes Jinky and Michelle in their latest, greatest, sexiest photo gallery every!
→ more 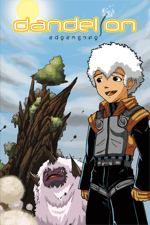 $5.99
Torn from his family and cast out of a dystopian future society, a young boy desperately struggles to survive in the brutal wastelands, armed only with...hope. In this anime-inspired futuristic tale, the human population has reached its maximum sustainable size and has retreated inside a massive, enclosed complex to shield itself from the pollution of the ravaged wastelands outside. Zero population growth is maintained by a baby lottery that allows each winning couple to bear a single child. So when on particular couple conceives twins, the authorities forcefully claim one of the children and expel him into the bleak wasteland. This young boy's survival will depend on his ability to adapt to the brutal conditions outside, coexist with a ragtag band of other outcasts, avoid the bloodthirsty clans of expelled criminals, and befriend the gigantic alien beasts that strike fear in all living things. The secrets he discovers in the barren wastelands will either offer salvation for his world or lead to its total destruction.
→ more 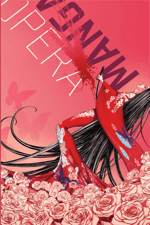 $5.99
Opera Manga! is a groundbreaking book that uses some of the best opera in the world to inspire manga literature. Breathtaking art and compelling stories make this volume an excellent entry point for those new to opera, while preserving the integrity of the works for enthusiasts and fans.
→ more 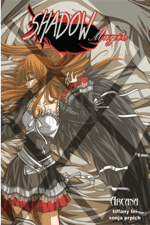 $5.99
Spanning the space between existence and dreams an unkown darkness is unfurling its wings across the dimensions, slowly wraping our world within its grasp. Should the gates between worlds open, nothing will be as it was... In a dimension where magic and technology coexisted, an Empire comprised of amazing and owerful species fell apart. The traitors who were responsible for the downfall fled to remote Earth to hide the B's Medallion stolen from the Emperor. However, they were trespassing where they didn't belong and are now forced to do the bidding of Atlantis. Several millennia have passed since then, and now the traitors reconstruct the barrier protecting Earth from other dimensions.
→ more
1 - 5 of 5 results