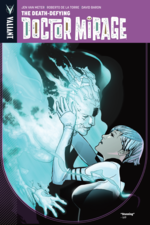 $9.99
Death was just the beginning... Doctor Mirage talks to the dead...but the only spirit Shan Fong can't find is that of her late husband, Hwen. Instead, America's favorite semi-retired paranormal investigator is haunted and raw, using her gift to solve homicides and bring peace to the recently bereaved. But when a big-time occultist with a classified military past hires her for a special job, Shan discovers a lead that might close the greatest mystery she's ever tackled - how to get Hwen back! Now, Doctor Mirage must enter the undiscovered country and cross all the realms of the underworld if she has any hope of rescuing the man she loves...or be forever lost beyond the earthly plane. Join Eisner Award-nominated writer Jen Van Meter (Hopeless Savages,Captain Marvel) and acclaimed artist Roberto de la Torre (Daredevil, Age of Apocalypse) as Valiant's occult adventurer embarks on a journey across the realms of the dead to bring her love back to the land of the living. Collecting THE DEATH-DEFYING DR. MIRAGE #1-5.
→ more 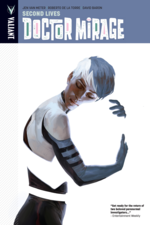 $14.99
In time, even the dead may die... Occult investigators Shan and Hwen Mirage lived their lives in the thrall of an epic love that few will ever have...until Hwen died tragically before his time. Now, after a perilous trip through the underworld, Shan and Hwen are reunited...but Hwen is still an intangible spirit of the dead - incapable of opening a spellbook or even touching his wife. Their options exhausted, the death-defying Doctors Mirage are about to enact a dangerous spell to restore Hwen's solid form...and grant his ghost a second life. But, in the wrong hands, their ancient rite will become a tool of terror - and unleash a force of pure, homicidal evil that lusts for the murder of the living and the dead alike... a torturous death that obliterates not just everything a person ever had in this world, but everything their ghost will be in the next! After multiple 2015 Harvey Award nominations, the most sought-after couple in comics returns with an all-new adventure from Eisner Award-nominated writer Jen Van Meter (Hopeless Savages) and acclaimed artist Roberto de la Torre (Daredevil)! Collecting THE DEATH-DEFYING DOCTOR MIRAGE: SECOND LIVES #1-4
→ more
1 - 2 of 2 results