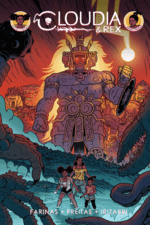 $9.99
After losing their dad, 12-year-old Cloudia and her kid sister Rex are taken on a road trip by their mother, who is having a hard time dealing with the stress of sudden single-motherhood. When their car is blasted off the road by a strange bolt from the sky, the kids find themselves with strange abilities--Cloudia has super strength, and Rex is . . . a woolly rhino. It seems they've been possessed by two twin gods, Thanatos and Hypnos, who are fleeing the god-realm which is being overtaken by The High Waveform, a single consuming entity. Their mission is to use the girls to ferry the remaining fleeing gods to the World Tree, where a new realm of gods can be reborn.It's all a lot for a 12 year old to fully appreciate until the weight of the responsibility catches up with her.
→ more 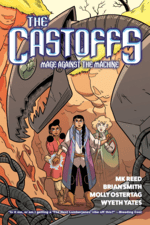 $12.99
Twenty years ago, mages fought for their survival against the Surrogate, a hive-minded robot army that consumed everything in its path. Now, a trio of young apprentice mages must cross the ruined forests to deliver a magical cure to a nearby town. But the girls couldn't be more different. Charris, a hotheaded fighter with elemental powers, Trinh, a shy mage who can literally turn invisible, and Ursa, a healer with more power than she lets on. The three girls must learn to trust and rely on each other if they're going to save the village!
→ more 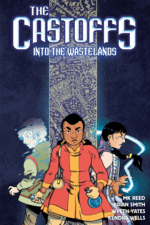 $12.99
Charris, Trinh, and Ursa have managed to work together long enough to defeat the evil Priestess and her hive-mind robot army, the Surrogate. They journey back to the village of Clifton to reunite with their guild, but once there, they discover that the Priestess may not be defeated after all, and a much larger threat may be looming. A secret from Ursa's past threatens to break the fragile trust between the three mages, but they must overcome their differences and work together if they stand a chance of surviving the coming darkness.
→ more
1 - 3 of 3 results