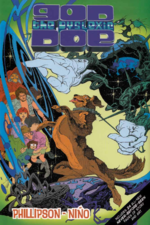 $4.99
Imagine a world, where the gods created by man, are all but abandoned. The gods, in their desperation, have now become the deities of the animals of earth. They now seek to over-throw both heaven and earth from their former masters, man, in their last ditch effort for survival. Enter the Dyslexic Dog. An ordinary dog that's only beginning to understand how extraordinary he really is. A dog who is a god? On a leash? Under the reluctant control of one little boy. Throw in an immortal god with suicidal aspirations & his nation of rowdy revelers; conspiracy internet & radio; time travel ; the end of the world coming in 2011 via the missing Mayan Calendar; Pandora's Box; a Pet Psychic who is anything but; the god Dar-win & his Evolution running wild; inept world governments? And so much more. God the Dyslexic Dog takes all this and runs, turning everything on its head, giving the book a chance to explore, experiment and entertain in ways few others can. So, buy the ticket, take the ride and see what all the howling is about and if your family pet has been looking at you a little strangely, watch out!
→ more 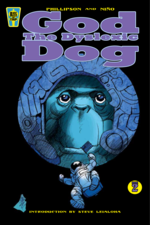 $4.99
Evolution is out of control. Darwin has taken over heaven. Pandora's Box has been re-opened. God the Dyslexic doG - the Pet of Man - has returned. What could go wrong? This all-new graphic novel is 112 pages of fully-colored psychedelic pleasure and includes an exclusive Alex Nino pencil sketchbook, an introduction by Eisner Award-winning artist Steve Leialoha, and a Volume 2 story script! Dogma just took a bite out of your Karma!
→ more 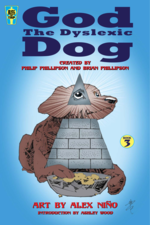 $4.99
For the love of doG! A young dyslexic boy and his dog (who just happens to be God) do battle against Darwin, evolution and mankind's old, discarded gods, one last time. The end of the world has never been more fun or twisted. Six years in the making, this cult-classic concludes with Alex Nino delivering some of his finest work in decades. Includes an introduction and sketch art by award-winning artist Ashley Wood and ten bonus pages of development art by Alex Nino.
→ more
1 - 3 of 3 results