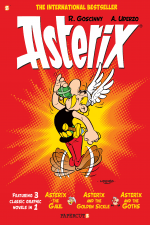 $14.99
Asterix is celebrating 60 sensational years as an international comics superstar, and in the first collected edition from Papercutz, the stories are newly translated into American English for a new generation of fans! The story of Asterix starts here. These are the first three adventures of Asterix as he defends his tiny village from the overwhelming forces of the Roman Empire. Join the short, spunky, and super-powerful warrior from Gaul and his faithful friends–including the boar-eating delivery man Obelix and the ecologically-minded canine, Dogmatix–as they battle to protect their village against impossible odds. Asterix Omnibus volume one collects “Asterix the Gaul,” “Asterix and the Golden Sickle,” and “Asterix and the Goths.” Three classic adventures in one great volume.
→ more 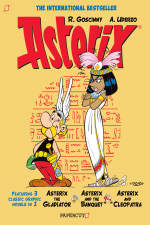 $14.99
Asterix mixes it up with everyone from Julius Caesar to Cleopatra in this outstanding Omnibus! After conquering Europe, where this feisty, little warrior is a true pop culture super-star, Asterix is invading America with another three classic adventures, newly translated into American English. Asterix conquered Europe ironically by keeping his tiny village in Gaul from being conquered by the Roman Empire. Turns out, Asterix and his fellow villagers have a secret weapon, a potion that imbues them all with super strength. But the Romans aren’t about to give up no matter how many times Asterix and his friends fend them off. These classic comics are not only incredibly entertaining, but the historic figures are brought to life in a way that’s exciting and humanizing, providing educational elements similar to the Geronimo Stilton graphic novels.
→ more 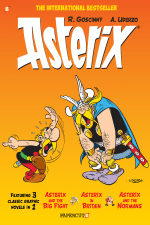 $14.99
One of the world’s greatest comics characters, the ever-fearless Asterix, continues to battle supposedly unbeatable odds to protect his tiny village from the Roman Empire. Fortunately, all of the villagers have super-strength thanks to a secret potion. In “Asterix and the Big Fight,” one of the three classic Asterix graphic novels collected here, the Romans are beginning to wise up. Instead of trying to conquer Asterix’s village, the Roman’s challenge Vitalstatistx, chief of Asterix’s tribe, to a one on one battle with the Gallo-Roman Chief, Cassius Ceramix of Linoleum. As per Ancient Gaulish customs, the loser would forfeit his entire tribe to the winner. “Asterix in Britain,” the Romans have conquered all of Britain except for a single village in Kent. Sound familiar? Anticlimax, a member of that British village, travels to Gaul to seek help from his first cousin once removed, Asterix. Together, with Obelix, they decide to bring back a barrel full of the secret potion that imbues anyone with super-strength, but word leaks out, and the Romans will do anything they can to thwart this rescue mission. Finally, in “Asterix and the Normans,” Asterix encounters a group of Normans who want to learn all about fear, and that’s just the tip of the iceberg as far as how many strange and crazy things happen in this particular adventure. We won’t even mention which pop star is parodied in this story! Just when you think you know what to expect in Asterix, the creators Goscinny and Uderzo throw things at you that you never could’ve imagined. That’s probably why Asterix remains such a successful comics character to this day!
→ more 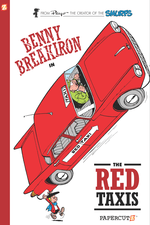 $8.99
Peyo, creator of The Smurfs, brings everybody’s childhood fantasy to life in this charming graphic novel series! Benny Breakiron is an honest, polite little boy with an en exceptional quality: he possesses superhuman strength, can leap over huge distances, and can run unbelievably fast! This little kid packs quite a punch, and he devotes his play time to stopping crime and injustice. In this first volume, a new taxi service has moved into Benny's town threatening to put Benny's friend, taxi driver Mr. Dussiflard, out of business. The more Benny learns about the Red Taxi Company, the more he realizes something isn't right. Who's behind this mysterious enterprise, and just what are they up to? Benny aims to find out and put a stop to it once and for all, and hopefully keep the property damage to a minimum! 64 pgs, FC
→ more 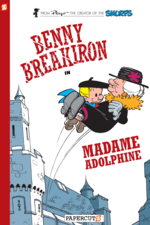 $8.99
Madame Adolphine is a kind, gentle old lady, and a good friend of the super-strong Benny Breakiron. So why is she robbing a bank, banging a man on the head with a mallet, and being thrown in the trunk of a car, with no memory of what happened? It’s up to Benny to get to the bottom of it . . . and stop it if he can.
→ more 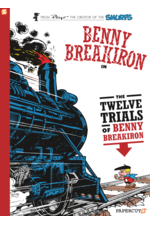 $8.99
When Monsieur Dussiflard finds a lead on a long-lost ancient treasure, he and Benny Breakiron are off to the desert on the journey of a lifetime! But they’re not alone; some shadowy figures from Dussiflard’s past are on the trail, as well, and they might make it there first. Will Benny’s super powers win the day—or actually get in the way? Benny Breakiron’s super-heroic adventures continue in this charming graphic novel series from the creator of The Smurfs!
→ more 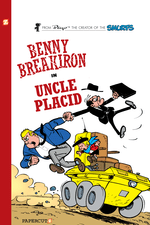 $8.99
Benny's uncle has a very important job: he guards the treasury of a very tiny -- but very rich -- neighboring country. Uncle Placid has his work cut out for him, with thieves of every stripe always plotting to break in and steal the money, but he never expected a thief to try and steal the machines that make the money! While traveling back home with Benny during a school break with the printing plates on board, it looks like super-strong Benny might be the only one able to fend off a daring raid!
→ more 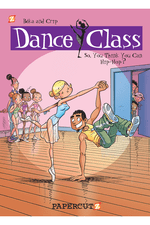 $7.99
Julie, Lucie and Alia are best friends who share one passion: dance! Between programs in ballet and modern dance, they also slip in classes on many other styles including hip-hop, a class run by the hunk KT, who’s got all three competing for his attention. As they prepare for the ballet “Sleeping Beauty,” they’d love to see him play Prince Charming. Any girl with a love for dance and taking classes will find this gag-filled series irresistible!
→ more 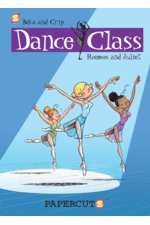 $7.99
The adventures of best friends Julie, Lucie, and Alia continue in the second “Dance Class” graphic novel. School is in session again and this time the girls are working on a ballet of “Romeo and Juliet.” When new student Tim is cast in the role of Romeo, the three girls find themselves competing for his affections. Can they get this production on its feet without ruining their friendship?
→ more 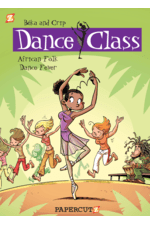 $7.99
Julie, Lucie, and Alia are best friends who share the same passion: dance! A new year of classes has begun and this year, in addition to their regular ballet and modern dance classes, the three girls are introduced to a new style of dance—African folk! Powered by deep percussion-based music, this style is unlike anything they’ve ever tried before. While the girls enjoy their new art form, problems at home and in the classroom threaten to cause them to have to stop taking their dance classes. Can the girls balance their studies and their extracurricular activities, or will they have to give up dancing for good?
→ more
1 - 10 of 78 results