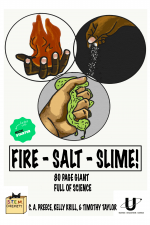 $14.99
FIRE - SALT - SLIME! is 3 amazing science comics bound into one. Each comic focuses on a different scientific exploration from a kids perspective. FIRE - Follow Richie and Marquita as they explore their fascination with fire! Richie becomes curious about the flame in a candle. The colors, the heat, the smell. Why is it doing all this? Marquita helps her younger foster-brother set up experiments to figure it out. SALT - Chris explores the wonderful world of salts! It starts with a simple “salt assault” to his sister Kelly. Chris is amazed that the salt seemingly disappears in water, which sets him off on exploring all sorts of properties of salts and comparing them to molecules. SLIME! - What should you do when you have a house full of kids? Buy them all packs of SLIME! and let them play. Mattie and her cousins have a sleep over and make all sorts of slime. Join their adventure as they make Borax slime, Thermochromic slime, Glitter slime, Magnetic slime, Edible JELL-O slime, and Fiber slime! Also, there’s a wild surprise at the end that I’m not going to spoil for you.
→ more 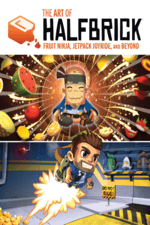 $39.99
Since 2001, the Australian game company Halfbrick Studios has been changing the mobile games scene. After seven years of making licensed games, Halfbrick took a chance and released Fruit Ninja to the world-- and the world became obsessed with slicing cartoon fruit. Propelling themselves forward on the smash success of Fruit Ninja, Halfbrick released even more games that took the gaming community by storm. Featuring art from Jetpack Joyride, Monster Dash, Dan the Man, and more, this art book explores the rich collection of never before seen art that tells the story of a creative and ambitious company that never ceases to deliver fun and joy!
→ more
1 - 2 of 2 results